Michael O’Mara Books is to publish a compelling and detailed account of the women affected by the brutal crimes of Peter Sutcliffe, known as the Yorkshire Ripper, by bestselling author Carol Ann Lee. 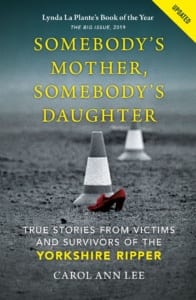 Somebody’s Mother, Somebody’s Daughter: True Stories from Victims and Survivors of the Yorkshire Ripper will be published in paperback for the first time on 10th December, drawing on first-hand interviews to focus on the women, giving a voice to them and their families. Paperback publication is timed to coincide with the release of the new Netflix series The Ripper, starting 16th December.

Peter Sutcliffe died earlier this month, and Lee turns the spotlight firmly away from him in order to focus on the lives of the women he killed and attacked. Placing their stories in context, she has produced a vivid picture of that time alongside a hard-hitting account of West Yorkshire Police’s handling of the case.

Carol Ann Lee was interviewed on BBC Radio 4’s Woman’s Hour about the case this month and wrote in The Guardian: “With little support and no counselling, the survivors nonetheless took up the threads of their lives and wove a new existence. News of Sutcliffe’s capture and his conviction came as an overwhelming relief, but the damage done to the women’s reputations as a result of institutional sexism brought agonies of their own. Yet these women persisted in rebuilding their lives and they succeeded.’”

Gabriella Nemeth, Senior Editor at Michael O’Mara Books, said: “Carol Ann Lee has written a compelling and detailed account of the women, putting them at the heart of the story. This important book offers a new perspective on a case that still grips the nation and it will stay with you long after you have read it.”

Somebody’s Mother, Somebody’s Daughter: True Stories from Victims and Survivors of the Yorkshire Ripper will publish in paperback on 10th December 2020, priced £8.99. The hardback was previously published in March 2019.