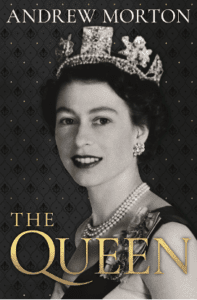 Publishing ahead of the Platinum Jubilee Weekend, The Queen takes us behind the scenes of the longest reigning monarch in British history to reveal an extensive, entertaining and insightful portrait.

Spanning her idyllic childhood and the unexpected road to becoming sovereign – through the premature death of her father and the previous abdication of King Edward VIII – at the age of just twenty-five, Morton explores her public life of duty and service alongside her private family life.

Andrew Morton said: “Queen Elizabeth II has become the stuff of superlatives: the longest reigning, most travelled and, for a shy woman, someone who has shaken more hands and made more small talk than any other monarch in history.

“Her life has been one of service scored with shocks and surprises, and with an unparalleled capacity to expect the unexpected. While her reign has been defined by divorce, her private life has been moulded by an irascible husband, an extravagant mother and a querulous eldest son. As she celebrates her platinum anniversary, the first monarch to reign for seventy years, she has, during a once in a lifetime pandemic, become the reassuring face of hope and optimism, the grandmother to the nation.”

Louise Dixon, Senior Editorial Director at Michael O’Mara Books, said: “This is a wonderfully vivid portrait of the life and times of our monarch, published at an unprecedented time in British royal history. Andrew Morton never fails to impress with his knowledge and insight, both of which he brings to bear here, along with a lightness of touch that makes this such a tremendous read.”

Andrew Morton is a leading authority on the royal family, and author of Diana: Her True Story, which spent fifty-eight weeks in the bestseller lists, was translated into 35 languages and has sold over 5 million copies since publication. Morton’s other bestselling books include Elizabeth & Margaret: The Intimate World of the Windsor Sisters, Wallis in Love: The Untold True Passion of the Duchess of Windsor and Meghan: A Hollywood Princess.