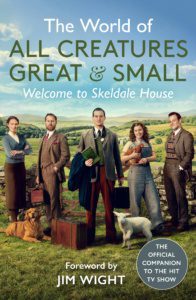 Michael O’Mara Books is to publish a tie-in book to the much-loved new adaptation of All Creatures Great & Small, based on James Herriot’s iconic books.

The World of All Creatures Great & Small: Welcome to Skeldale House will reveal exclusive behind-the-scenes insight into the making of the hit Channel 5 show, taking readers through the doors of the famous 1930s practice and revealing the real-life inspiration behind the locals of Darrowby village and their animals.

Featuring exclusive interviews from the cast and creators, with everyone including lead director Brian Percival, lead writer Ben Vanstone as well as a veterinary advisor, animal trainers and actors Samuel West, Anna Madeley, Nicholas Ralph, Callum Woodhouse and Rachel Shenton, among others. Along with full colour plate sections, the book will be an ultimate celebration of the house and it’s unforgettable setting in the Yorkshire Dales.

Launching last Autumn on Channel 5, All Creatures Great & Small was an instant ratings hit with over 5 million viewers, with acclaimed reviews from Vogue, The Times and The Telegraph. The previous BBC adaptation ran for over 12 years, and James Herriot remains a national treasure – his books have not been out of print since they were published over 50 years ago. The remake of the show, and the book, have the blessing of the Herriot estate.

Sir Colin Callender, Executive Producer and Chairman of production company Playground, said: “I’m thrilled to be working with Michael O’Mara Books to bring the wonderful world of Darrowby to print. Our entire cast and crew worked tirelessly to bring James Herriot’s iconic stories back to the screen for a new generation. We could not be more excited to share with our loyal viewers an in-depth account of what it took to get there.”

Nicki Crossley, Senior Commissioning Editor at Michael O’Mara Books, said: “At Michael O’Mara, we are all such big fans of James Herriot’s books and it was fantastic to see the reception of the first series. We are very proud to be working with the Playground team to celebrate the show and its incredible heritage.”

The World of All Creatures Great & Small: Welcome to Skeldale House will publish in hardback on 28th October 2021, priced £18.99. UK and Commonwealth Rights including ebook and audio were acquired by Nicki Crossley from Shirley Patton at ITV Studios Global Distribution on behalf of Playground.